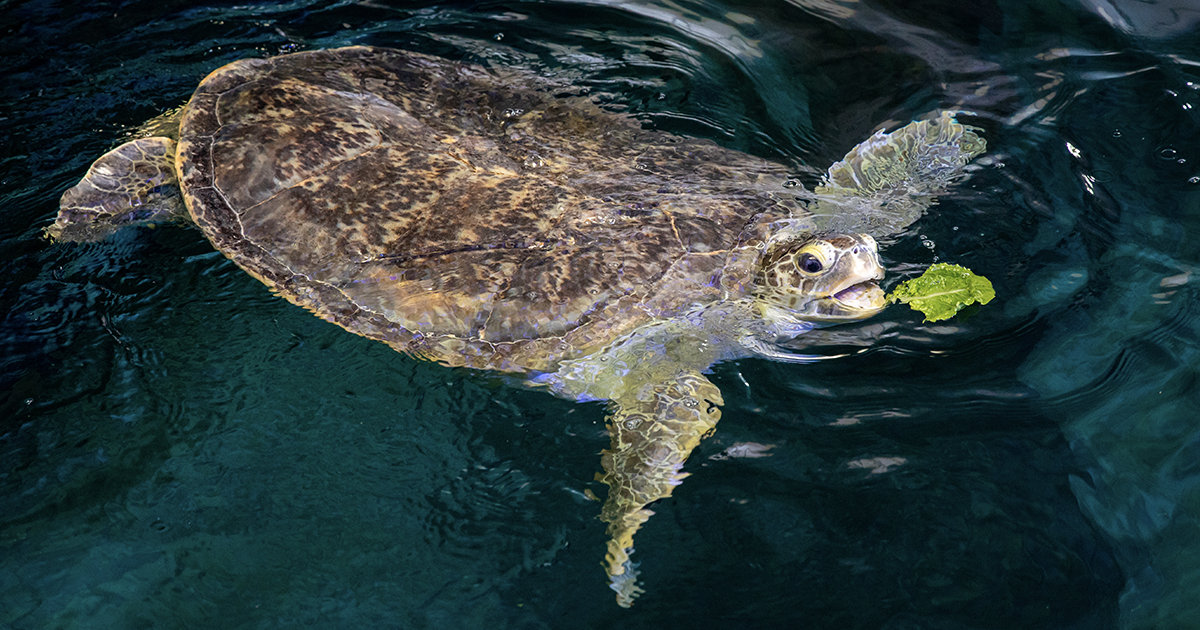 Back in July, CMA saw the release of three of their rehabbed turtles. Cara is a sub-adult loggerhead who was found floating sideways by a boater near Indian Shores Beach on March 26th. Upon intake, she was very lethargic and underweight. There was also a large number of barnacles and algae covering her carapace. X-rays revealed a large amount of GI gas which could be the cause of her buoyancy. With medications and a little TLC, Cara’s buoyancy resolved and she gained some weight! Weighing around 80 lbs, Cara has been cleared for release by our veterinarian and Florida Fish and Wildlife Conservation Commission (FWC). Cara is also one of several sea turtles who came in when CMA was closed to the public due to COVID-19. Their work never stops! Wish Cara well!

Gus is a juvenile, green sea turtle who was found floating offshore of the Hudson area in mid-March. When Gus arrived, he was extremely lethargic and underweight. It was later determined that Gus was battling an infection that caused severe debilitation. Due to his condition, he needed to be tube-fed around 2 weeks since he couldn’t eat on his own. After about 3 months of rehab, Gus has been deemed healthy enough to be released. Gus has been cleared for release by both CMA’s veterinarian and Florida Fish and Wildlife Conservation Commission (FWC) and is ready to return home to the big blue! Good luck Gus!

Isurus is a juvenile Kemp’s ridley who was accidentally caught by a fisherman in Cedar Key, FL. He arrived at CMA on June 16th. X-rays revealed that a “J” hook was ingested and deep in his esophagus. The hook was successfully removed orally using Endoscopy! After a quick few weeks in rehab with CMA, he is healthy and has been cleared for release by their veterinarian and Florida Fish and Wildlife Conservation Commission (FWC)! Wish him well out there!

In addition to an exciting start of the month with several Turtle releases CMA in partnership with Page Development has opened Winter the Dolphin’s Beach Club! Clearwater Beach’s newest family-and-eco friendly hotel, managed by Tampa based Mckibbon Hospitality and part of the Ascend Hotel Collection portfolio by Choice Hotels. Winter the Dolphin’s Beach Club comes to life after extensive renovation and re-haul of an existing Choice hotel with a focus on sustainability and conservation.

Funds from each room night will go towards the care, education, research, and conservation of marine mammals. This project will surely inspire guests, employees, and the community to protect marine life for generations to come.

Please note CMA has changed guidelines for the safety of staff and guests. Please check their website SeeWinter.com for updated information. Visit and be inspired by Clearwater Marine Aquarium.