As families around the world prepare to celebrate Mother’s Day, Discovery Cove has announced the birth of two spotted eagle rays, a threatened marine species which is a part of the Species Survival Plan® (SSP) of the Association of Zoos and Aquariums (AZA). Born April 2nd, the pups are receiving around-the-clock, world-class veterinary care from Discovery Cove’s team. 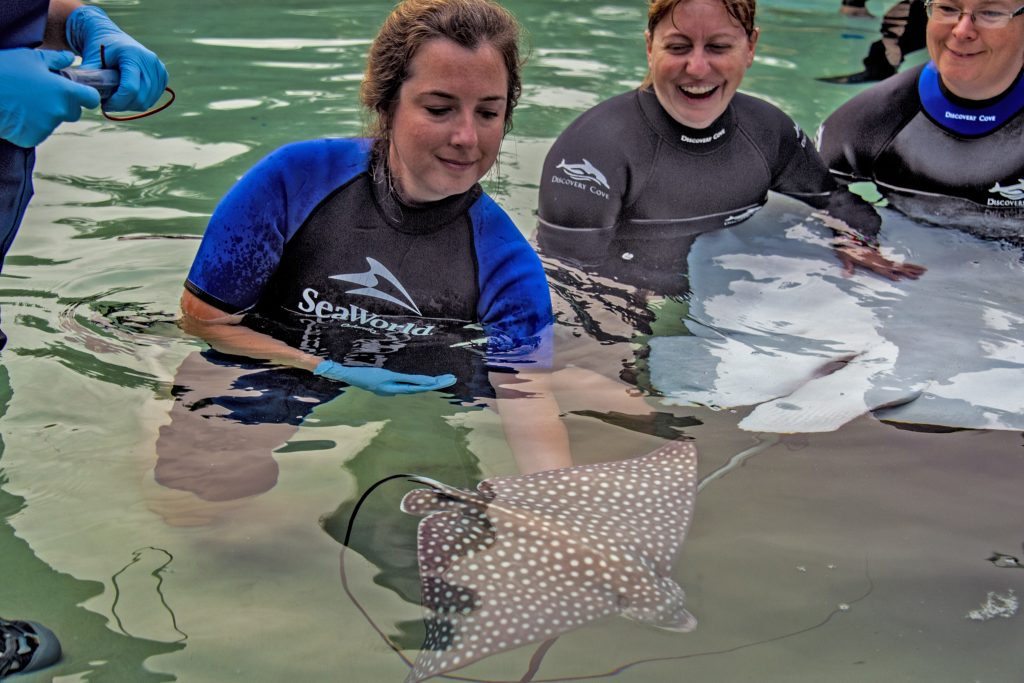 Spotted eagle rays are in the fish family, recognizable for their flat, wide bodies and unique spotted coloration.  Like fingerprints, each spotted eagle ray has its own one of a kind pattern. This is the first birth for proud parents Nerina and Apollo.

“The exciting birth of these eagle ray pups demonstrates our company’s commitment to conservation and species survival efforts,” said Kyle Miller, President of Discovery Cove Orlando. “I’m very proud of our animal care specialists and veterinary team for developing leading-edge reproductive health expertise, technologies and capabilities.  We are helping to save this species from extinction and look forward to seeing these pups grow and thrive at Discovery Cove.”

“The work done by zoological facilities like Discovery Cove is critical for the protection of Spotted Eagle Rays and other animal populations worldwide,” said Dr. Candice Dorsey, Senior VP of Conservation, Management and Welfare Sciences at the Association of Zoos & Aquariums (AZA). AZA administers over 500 Species Survival Plan® programs, including one for Spotted Eagle Rays. “Like coral reefs and many other ocean dwellers, Spotted Eagle Rays are a threatened species. AZA-accredited facilities like Discovery Cove are working cooperatively through the SAFE: Saving Animals From Extinction program to help save rays from extinction. Discovery Cove is to be commended for its investment in and contribution to research, education, and conservation efforts that help protect and rescue species at risk and their habitats.”