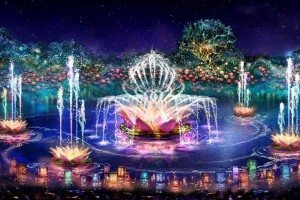 The show will be staged on Discovery River, the central waterway of Animal Kingdom.  Construction walls are still in place, shielding park visitors from the work, which includes seating along the shore, lighting and other structures. It will be the first-ever nighttime show at the theme park, which opened on April 22, 1998.

Disney has described the production as having live performances, water screens, “swirling animal imagery” and floating lanterns. “During the show, the hosts set out from the shore on elaborate lantern vessels for a dance of water and light to summon the animal spirits,” according to an earlier Walt Disney World news release.

The previously announced nighttime version of the park’s popular Kilimanjaro Safaris also will debut on April 22, a Disney spokeman says.  The attraction will be “artfully bathed in the look of sunset with special lighting,” a news release said.

Other ongoing construction at Animal Kingdom includes an area based on the movie “Avatar,” which is expected to open in 2017.