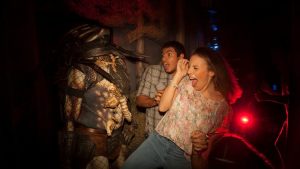 The goulish FX television series will be featured at this fall’s event in a brand new haunted-house maze  at Universal Studios theme park. It will include three installments from the anthology. Along the way, guests will encounter serial killer Bloody Face, the voodoo Queen of New Orleans Marie Laveau, Madame Delphine LaLaurie, Piggy Man, the grisly Polk family, the ghosts of the blood moon and more.

Universal released no other details about its Halloween Horror Nights mazes or other entertainment. The festival of fear will run for 34 nights between Sept. 15 to Nov. 4. The park has not released its full list of ticket options for the event.