The 2019-20 Orlando Magic schedule is here! It’s a must do family night out for anyone visiting Orlando from the UK – come experience an NBA game live at the Amway Center in downtown Orlando. The Amway Center provides fans with the complete NBA experience, between excitement on the court, halftime performances, fun for the kids, bars, and restaurants, and much more! There are 44 home games between October and April, so you can find a game that fits in your schedule.

Most games are at night, which means you can enjoy the Florida sunshine throughout the day and then attend a game for some evening entertainment. 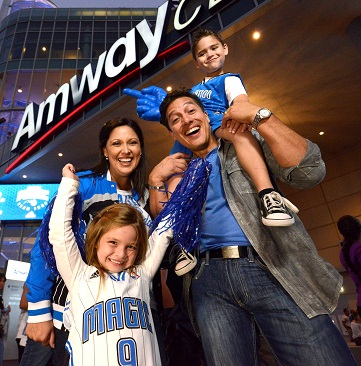 The Magic have three preseason games at home against the Boston Celtics, Philadelphia 76ers, and the Miami Heat, giving fans an opportunity to preview the Magic in action. Preseason games offer the same level of entertainment and fun for the family as the regular season. 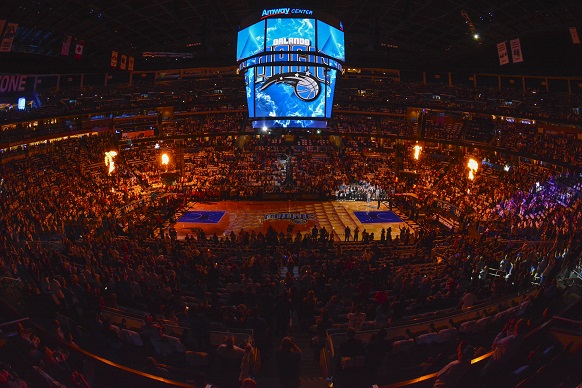 The Magic tip-off their regular season on October 23 against the Cleveland Cavaliers. After making the playoffs last season, the fans’ enthusiasm the Magic has continued into this season. Beyond the opening night game against the Cavaliers, the Magic will also face the Golden State Warriors, Los Angeles Lakers, and Houston Rockets throughout their season. The holiday season is also set to be a thrilling time, as the Magic are scheduled to play the Chicago Bulls, Philadelphia 76ers, Atlanta Hawks, their in-state rival, the Miami Heat, and the Utah Jazz throughout late December and early January. In addition, this year the Magic also have games during the Easter holiday, playing the Boston Celtics and Toronto Raptors on April 10 and 15.

Not only will you get to see world-class basketball as the Magic face off against other teams on the court, but you will also be entertained by STUFF, the Magic’s mascot, who is always doing flips, dancing, and making everyone in the crowd laugh. The Magic’s new hip-hop dance team, “The 407”, is sure to bring excitement during halftime and timeouts.
The Amway Center houses nine bars and restaurants, including an outdoor bar with some of the best views of the city, and Jernigan’s, a restaurant inside the Amway Center that overlooks the court. No matter when you are planning your trip, add an Orlando Magic game to your vacation for an experience that is sure to be unforgettable.