President Trump nods, speaks, talks with his hands but thankfully he doesn’t tweet. 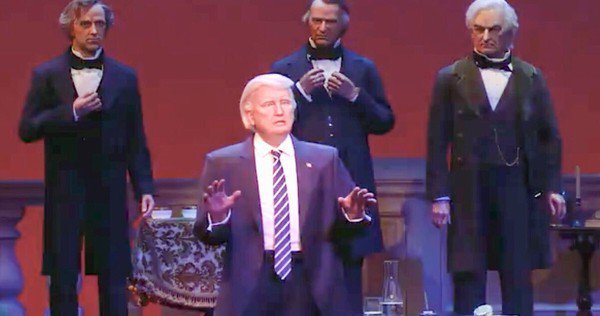 Animatronic Donald Trump made his debut this week in the Hall of Presidents at the Magic Kingdom. Walt Disney World visitors got a sneak peek of the refurbished attraction with the Trump figure front and slightly off to one side.

The first part of his speech is a simple re-recording of the presidential oath of office. Then he speaks about the spirit of the American people and the U.S. Constitution – all the while  talking with his hands.

“Above all, to be American is to be an optimist — to believe that we can always do better — and that the best days of our great nation are still ahead of us,” Trump concludes. “It’s a privilege to serve as the president of the United States, to stand here among so many great leaders of our past, and to work on behalf of the American people.” Lacking a “Make America Great Again” cap, his figure wears a dark suit and a diagonally striped tie.

While the attraction was closed for refurbishing, there was movement among those who oppose President Trump to exclude him or his voice from the attraction. An online petition gathered more than 15,000 virtual signatures. But this summer, Walt Disney Co. CEO Bob Iger said that Trump had agreed to record for the Hall of Presidents. Every sitting president since Bill Clinton entered office has had a speaking part, Disney has said.

The Hall of Presidents, which debuted with the Magic Kingdom in 1971, frequently gets a refurbishment with the change in leadership. This year, the theater received an upgrade in its sound, light and projection packages.