Come be inspired and learn about the ongoing work of rescue, rehabilitation, and release this summer at Clearwater Marine Aquarium. Our marine life rescue center is home to Marine Life featured, in the Dolphin Tale movies, filmed on location in Clearwater, Florida — just 90 minutes from Orlando. Clearwater Marine Aquarium staff and volunteers work each day to rescue marine life and provide the most advanced and effective care to maximize the opportunity to return sick or injured animals to their homes. 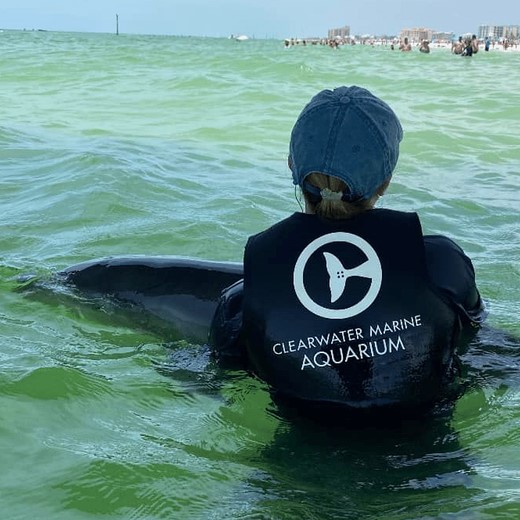 On July 20th, our Rescue Team responded to a distressed dolphin calf at Clearwater Beach. The calf was found entangled in a crab trap. The team attempted a release to reconnect it with its mother in the wild. Upon release, it swam towards the shore and was struggling to swim in the open water. The Southeast Stranding Network and National Oceanic and Atmospheric Administration (NOAA) directed us to transport the animal to SeaWorld for rehabilitation.
If you see a marine animal in distress contact your local wildlife rescue organization.
Contact CMA’s 24-hr rescue line at 727 441-1790 ext. 1 in Tampa Bay. 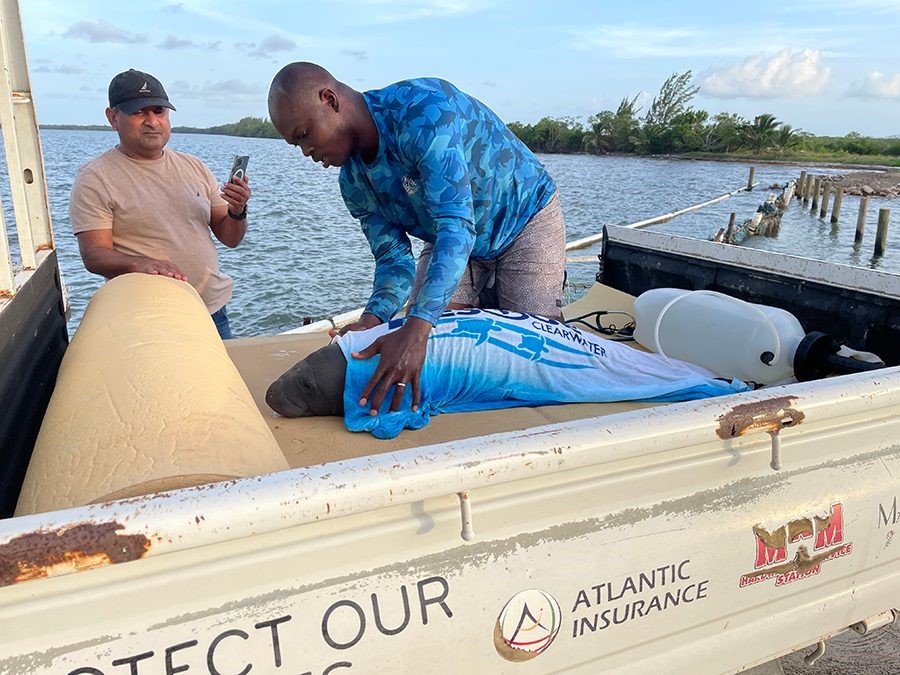 On July 20, 2022, Clearwater Marine Aquarium Research Institute’s Marine Mammal Rescue Team in Belize received a report of a baby manatee that was believed to be injured or orphaned at the Paradise Shrimp Farm south of Belize City. The calf was reported to have been seen in the same location for two days with no other manatee in sight. Our team immediately deployed to the area and upon arrival, the calf was observed alone at the fence line of the water intake for the shrimp farm.

Initial observation showed that the calf did not seem to have any injuries but was indeed alone as no other manatees were observed in the area. Our team quickly strategized a plan of action for rescue. After the first rescue attempt, it was clear that the calf was feisty and very energized as it slipped away from the team. Upon the second attempt, the team tried to hoop the calf using a large hoop net, and still, the calf managed to slip through but in that process was secured by CMARI Belize Research Biologist Jamal Galves and was eventually carried out of the water.

A Healthy and Hungry Manatee Calf 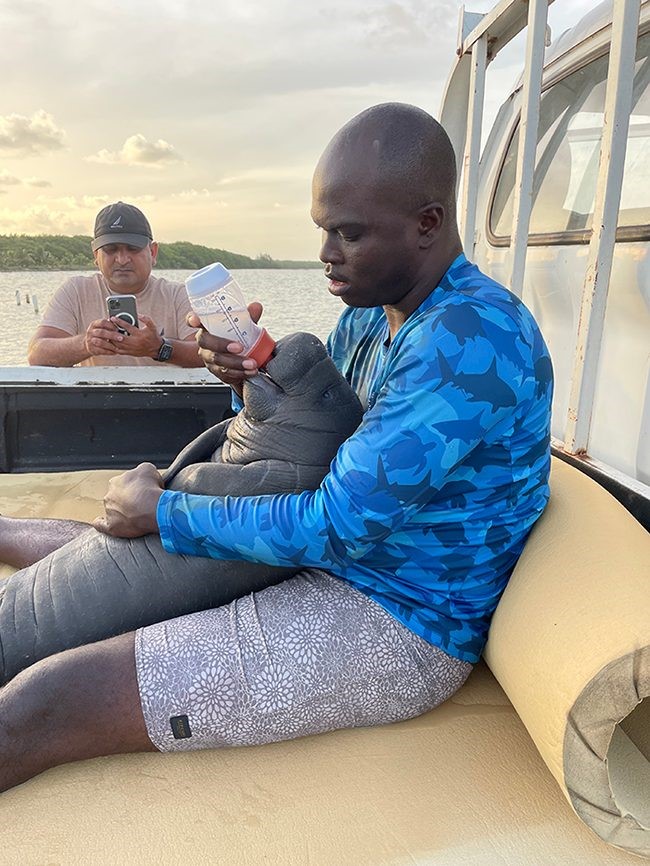 Initial assessment showed that it was a young male calf, approximately 2 months old, in very healthy condition and he did not appear to have any physical injuries. Its breathing was good, its heartbeat was stable and strong, and its body appeared to be in great condition! During the initial assessment, the calf had been heard vocalizing and expressing signs and sounds of sucking which was an indication of hunger. The young male calf was offered a bottle formula of rehydration salt.

Transport to a Rehab Center 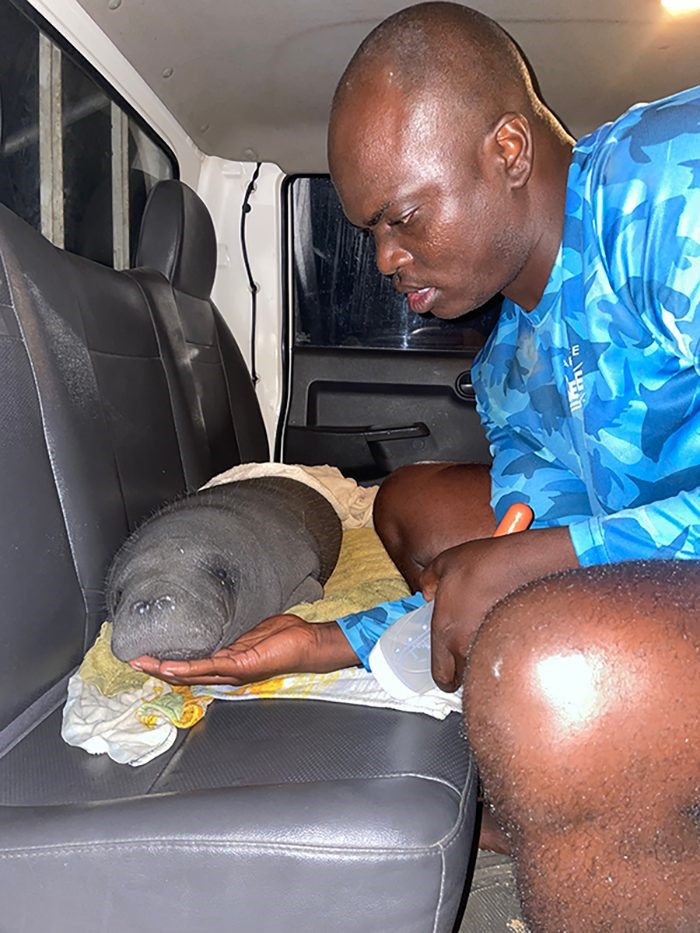 Once the calf was settled in and ready for transport, our team traveled to the rehab center. During the transport, the team kept the calf comfortable and wet while monitoring his breathing, and continued to administer fluids when the calf exhibited feeding behaviors.

After five hours of travel, the team arrived at the rehab center and the calf was carried over to a small pool that was prepared for him. Upon entry into the water the young male thrashed around for a few seconds and eventually calmed down so that he could start investigating the pool where he spent the remainder of the night. The young calf was reported to have been doing great and has now started feeding well. Further assessments will be done soon and his rehabilitation journey will start with the aim to be returned to the wild.

Special thanks to the Paradise Shrimp Farm for reporting this incident and for the assistance in monitoring the calf and for support with the rescue! 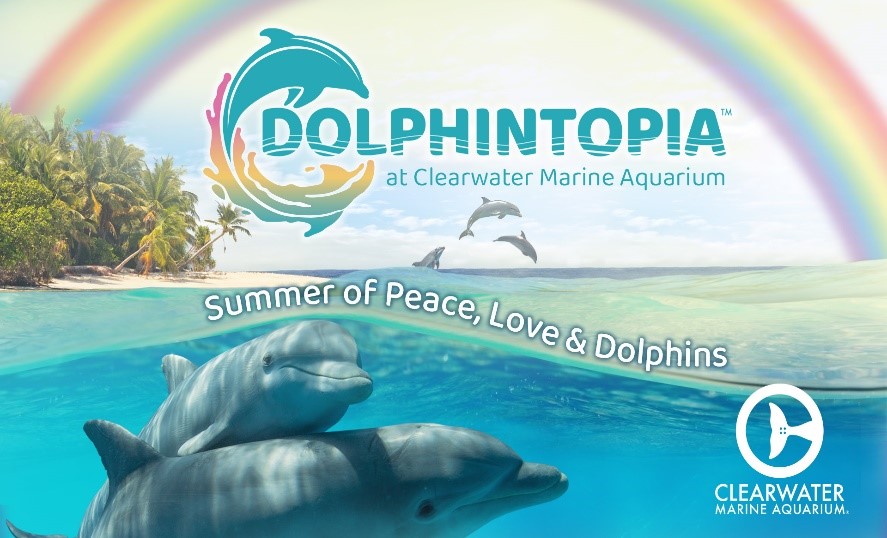 It’s the Summer of Peace, Love, and Dolphins at Clearwater Marine Aquarium! Families are invited to celebrate the facts, fiction, and fun of these enchanting marine mammals. Dolphintopia is a multi-faceted immersive celebration that explores, not only the fascinating science of dolphins but their intimate connection with humans throughout history. This celebration will include unique dolphin art displays and activities, interactive shows exploring our intangible connection with dolphins, and colorful photo opportunities for the whole family. The elements of this saltwater celebration will ebb and flow like the tides, offering return guests different experiences throughout the season. 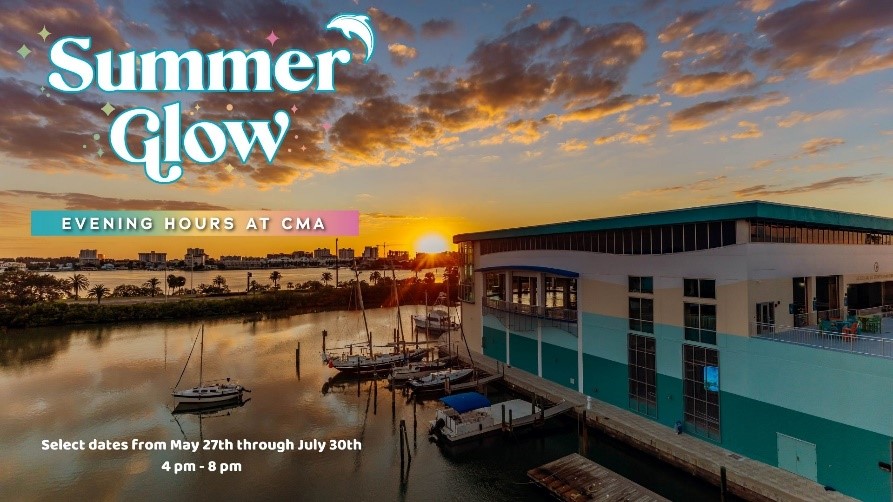 As the evening begins, Clearwater Marine Aquarium transforms into a summer celebration! This event has been extended and it will run every Friday and Saturday until September 3rd. Enjoy live entertainment, family-friendly activities, festive food, drinks, and sparkling views of the water. Experience a different atmosphere throughout the aquarium and watch as the rescued marine animals interact in new ways. It’s the summer of peace, love, and dolphins. Celebrate with us during Summer Glow evening hours at CMA!

Producer and former CEO David Yates will be back at CMA for a special talk about his new book and his time with Winter the Dolphin on August 20! Be sure to stick around after the talk for a book signing opportunity.