SeaWorld is proud to partner with the U.S. Fish and Wildlife Service (USFWS), National Oceanic and Atmospheric Administration (NOAA) Fisheries, and the conservation groups Cayman Turtle Centre and Turtles Fly Too, to help ten endangered Kemp’s Ridley sea turtles as part of an international conservation effort.  The adult sea turtles, eight males and two females, were raised at the Cayman Turtle Centre as part of an experimental captive breeding program that began in 1980 and ended many years ago.  These turtles were part of a group of yearlings that were sent as part of a trial effort to determine whether the species would successfully breed in captivity. At that time, the wild Kemp’s Ridley population was at risk of functional extinction due to hunting and being unintentionally caught in shrimp trawl fisheries. Fortunately, the Kemp’s Ridley sea turtle population began growing as international conservation efforts to reduce their main threats were set in place. As the wild population increased, the project was concluded, and these turtles are the last remaining of this group. 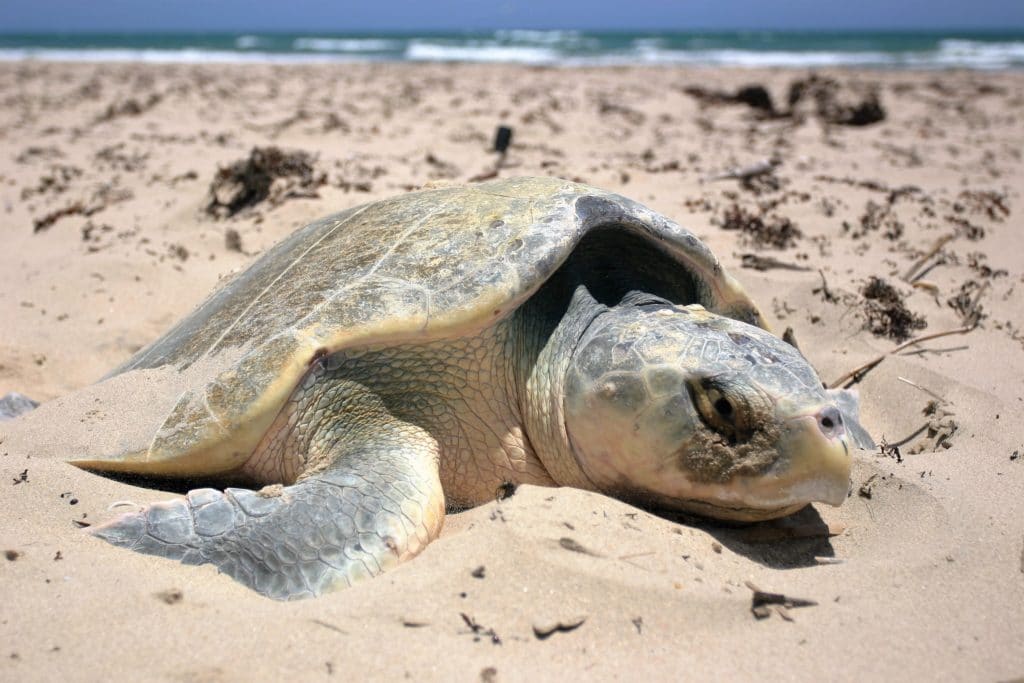 USFWS and NOAA Fisheries evaluate the release of sea turtles on a case-by-case basis and consider their history in human care, potential disease risks to the wild population, review of cases involving similar situations and consultation with sea turtle experts. After careful consideration, there are significant concerns that a combination of factors would jeopardize these turtles’ ability to survive in the wild.  These factors include strong habituation to humans and the lengthy duration in which they have been in human care, which may disrupt natural behaviors. NOAA and USFWS deemed these turtles non-releasable into the wild due to their lengthy time in human care.

These ten turtles were flown by Turtles Fly Too in April 2022 to SeaWorld in Orlando where they have been receiving expert care during a mandatory 90-day quarantine. The turtles are now headed to several zoos and aquaria across the United States approved by USFWS to provide long term care for these endangered species.  Once settled into their permanent homes, these turtles will become Animal Ambassadors to educate the public about conservation, the Kemp’s Ridley sea turtle, and the threats they face in the wild.

“In the 1980’s the Cayman Turtle Conservation & Education Centre (then known as the Cayman Turtle Farm) received Kemp’s Ridleys as part of an effort to preserve the DNA and future of this endangered sea turtle,” said Walter Mustin, Ph.D. and Chief Research & Conservation Officer at the Cayman Turtle Centre. “The remainder of the collection, recently sent to Sea World, will be placed in facilities that can continue to showcase this magnificent species and highlight conservation challenges involved in their continued survival.”

Turtles Arrival at SeaWorld Orlando and What Follows After Quarantine

“Turtles Fly Too has been devoted to conservation and restoration efforts for many years and is wholeheartedly committed to working alongside other organizations and agencies to ensure the challenges facing protected marine species and those who care for them are met with clear solutions and real actions. Extinction is forever.” said Leslie Weinstein, President Turtles Fly Too.

The turtles have been in quarantine at SeaWorld Rescue in Orlando since April 2022, a necessary practice whenever animals are moved internationally or between facilities to avoid accidental transfer of diseases.  The turtles receive a full veterinary exam, bloodwork, radiographs, and examination for parasites. SeaWorld Orlando’s turtle care specialists provide a healthy diet, and closely monitor animal behavior and weights.

“SeaWorld has more than four decades of experience caring for a wide variety of sea turtles all of which are threatened or endangered which is part of our mission to protect marine animals and their habitats globally,” said Jon Peterson, VP of Zoological Operations at SeaWorld Orlando and head of the SeaWorld Orlando Rescue Team. “In addition to providing long term care, we’ve rescued and rehabilitated more than 2,500 turtles with the goal of returning healthy animals back to the wild as we view rescue and rehabilitation as an important line of defense in the fight for species survival.  The SeaWorld Conservation Fund has also provided more than $100,000 in grants and scientific support to 10 different turtle conservation projects across Africa and the Americas.”

Following quarantine, the turtles will be sent to zoos and aquaria around the U.S. which meet the U.S. Fish and Wildlife Service’s Standard Care Conditions. They will be housed in enclosures simulating natural habitats and will receive a proper diet and behavioral enrichment.  Facilities are selected by USFWS based on interest in providing life-long homes with a high standard of care, experience with sea turtle husbandry, regional public educational value for Kemp’s Ridley conservation, and compliance with USFWS requirements related to endangered species.