We have long considered the Kennedy Space Center to be one of Florida’s essential attractions. Its mix of history, exhibits, and excitement are unmatched anywhere in the world.

The sense of proud space heritage comes through loud and clear, and the KSC’s achievements have provided some of the most iconic moments of the 20th and 21st centuries.

So, it only makes sense in 2022, with the busiest year ever for launches from the home of One Small Step For Man, that the Center has unveiled a scintillating new attraction that encapsulates the present AND future of space travel. 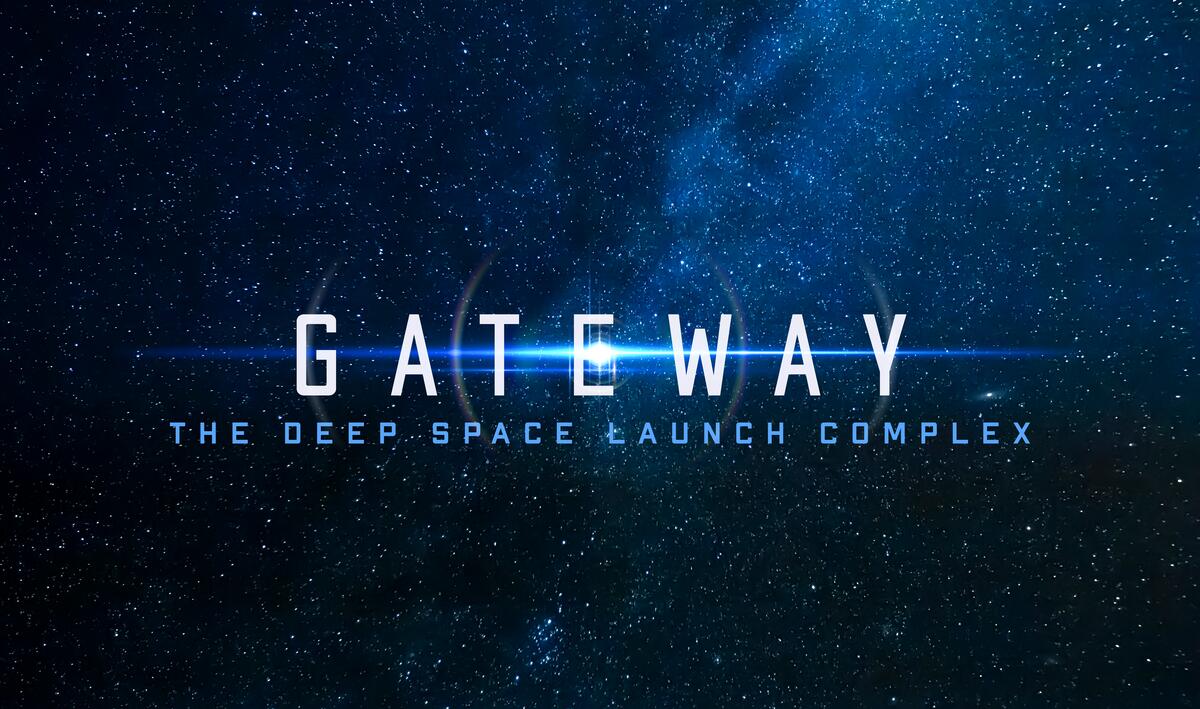 It’s called Gateway: The Deep Space Launch Complex, and it is located in an imposing new three-story, 50,000-square-foot building on the north-east side of the signature Rocket Garden, a purple-and-silver structure of substance and distinction.

Just to start with, we LOVE the title and the allure that it represents. This is aspirational, this is inspirational, and this is pure sci-fi excitement all rolled into one expansive presentation. Yes, we’re talking about manned missions back to the Moon, to Mars, and – in best Buzz Lightyear speak – far beyond!

For anyone who thinks the KSC’s main space involvement ended with the retirement of the Space Shuttle program, prepare to be amazed.

Walk through the entry portal – it’s WAY too substantial to be merely a door – and you are immediately surrounded by an immense gallery showcasing the equipment and machinery of the current generation of space exploration. 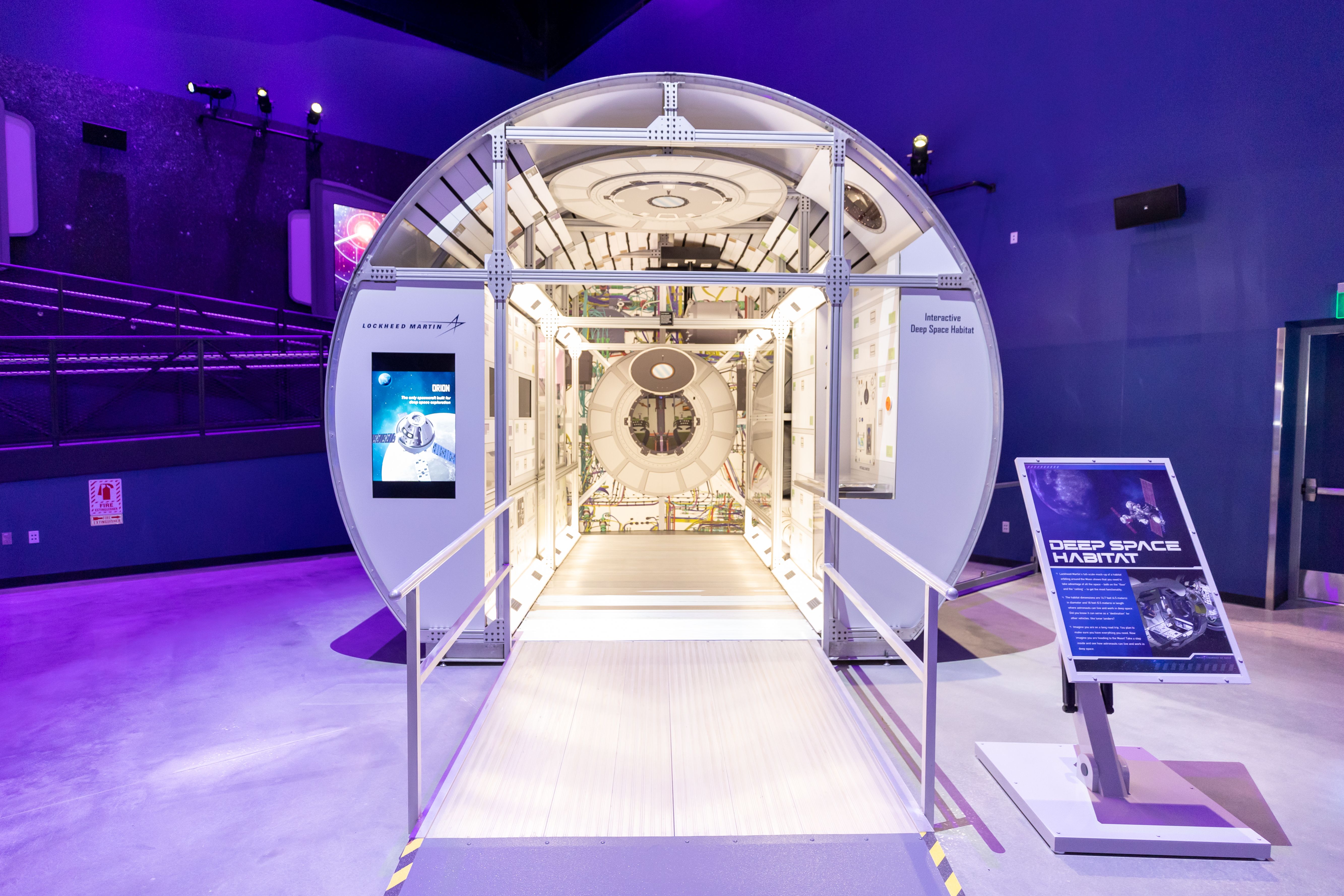 From the gigantic space-used Falcon 9 rocket booster to the scale model of the under-development Sierra Space Dream Chaserspacecraft, designed to transport crew and cargo to the International Space Station, this is an impressive statement of today’s “space race.”

The showcase of impressive gadgetry is also a literal Who’s Who of the KSC’s current space industry partners:

No wonder the KSC’s chief operating officer Therrin Protze insists: “Gateway: The Deep Space Launch Complex is a bold new attraction where guests will personally experience NASA’s next giant leap and beyond, highlighting all the excitement within the space industry.” 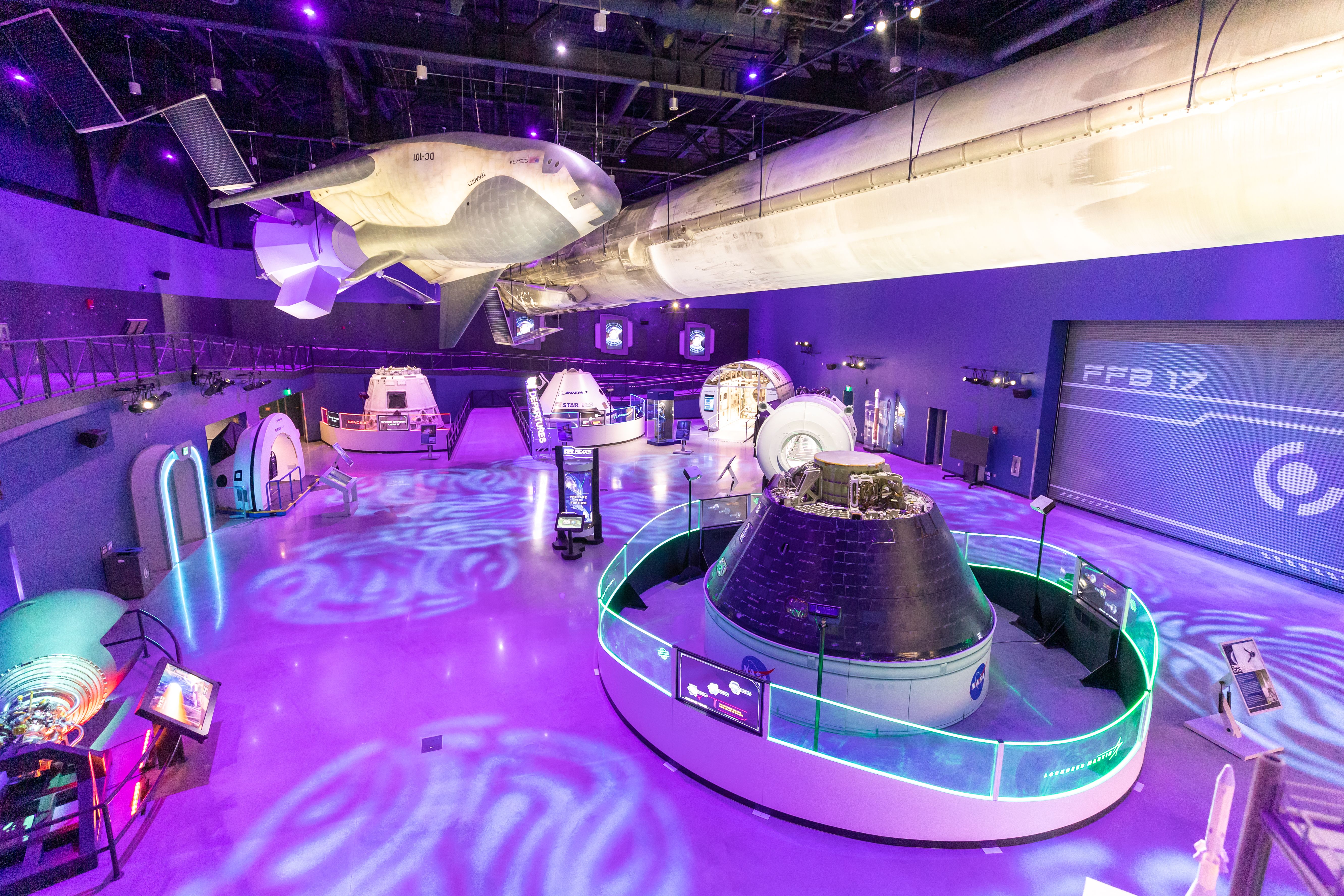 There are plenty of interactive exhibits and activities, too, most notably the Boeing Starliner cockpit simulator that allows visitors to try their hand at being a pilot, and the Robotic Space Explorers Wall, plus a look at the fabulous James Webb Space Telescope, which is set to reveal more wonders of the universe.

Once you’ve sampled all that the main gallery has to offer – which also includes a fascinating look at a Deep Space Habitat module and a cutaway model of the immense RL-10 rocket engine – head up to the second level for the truly immersive Spaceport KSC.

This special feature of the Gateway complex offers four different simulated space journeys, each with their own unique look at future space travel.

Starting with a look through digital windows for glimpses of Spaceport life, it sets visitors up with a choice of four boarding gates and the deep-space adventures they represent in what is actually a theater-based simulator (a bit like a scaled-down version of the Soarin’ attraction at Walt Disney World’s Epcot park). They are:

Red Planet: Get a first-hand close-up of the rugged beauty of Mars, our nearest planetary neighbor, featuring a look back at the planet’s ancient oceans, an encounter with the pioneering Perseverance rover, and an escape from one of the infamous dust storms.

Daring Explorers: Take a breathtaking journey to Saturn and Jupiter for stunning up-close views of the gas giants and their moons Titan and Europa, with a look at the liquid lakes beneath Titan’s atmosphere, Jupiter’s planet-sized storms, and the force of Europa’s geysers.

Cosmic Wonders: Head into deepest space to witness interstellar sights like the inky Horsehead Nebula dust cloud, the glowing tendrils of the Crab Nebula, and a special visit to a massive star about to go supernova for an experience of unsurpassed cosmic beauty.

Uncharted Worlds: Take a 40-lightyear trip to the Trappist-1 system, a collection of seven worlds orbiting a red dwarf star, including a hot steam planet and a frozen world of ice as well as a world nestled inside the star’s habitable zone, the region most likely to host life as we know it.

It makes for a terrific visual presentation and its easily-digestible format provides no small element of education, too, making for a surprisingly informative as well as entertaining package.

And don’t miss a taste of the Space Center’s latest food and beverage outlet, the Space Bowl Bistro, which serves build-your-own bowls with a choice of various proteins atop quinoa, rice, greens, or noodles.

We already rate the KSC as potentially our most rewarding day out, but now there is even more to see and enjoy, so be sure to look up all our options for a chance to explore this magnificent space extravaganza.

Choose from excursions such as the KSC Plus Airboat Ride, the Space Center plus Chat with an Astronaut, the #1 Space Center Tour, or just our Transport Only option.

Be sure also to ask about our Price Match Guarantee. We do our best to always offer the lowest price, but, if you find a lower qualified price for an identical tour on another site, we will match it, no questions asked.