Orlando Attractions Update – After years of delays, construction is starting on a hotel-and-retail development aimed at budget-conscious Disney World visitors and athletes attending competitions at the resort’s ESPN Wide World of Sports Complex.

Groundbreaking is scheduled for Oct. 16 for two Marriott hotels at Flamingo Crossings, a project at the western edge of Disney World. TownePlace Suites, Marriott’s extended-stay brand, and SpringHill Suites should open by January 2016. Between them, they will have 500 suites. 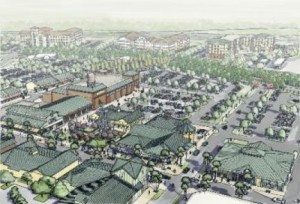 Guests are expected to include not only vacationing families, but teams attending events at Disney’s sports complex. To help attract athletes, the two hotels will feature a shared recreational area with two batting cages, a basketball court and a multipurpose practice field.

Sports teams “spoke loud and clear in terms of the types of accommodations they were looking for,” said Stuart Newmark, executive vice president and chief operating officer of Yedla Management Co., which will run the hotels.

When it’s built out eight to 10 years from now, Disney expects Flamingo Crossings to have up to 5,000 hotel rooms and time-share units. It would also include 500,000 square feet of retail space, anchored by a villagelike town center. That would include fast-food and casual-dining chains, and stores selling groceries, toiletries and clothing.

Disney originally announced the 450-acre project in 2007, but it stalled in the economic downturn.

Targeting the sports-tourism market is a smart strategy, said Scott Smith, an assistant hospitality professor at the University of South Carolina.

“They are appealing to a niche market which is growing, these traveling sports teams,” he said

“As the ESPN complex kind of gets bigger and more experienced and reaches out and gets these different teams to come in, they need a place to stay,” Smith said. “If you travel a lot, you’re not going to be shelling out the dollars for the Contemporary or Grand Floridian.”

Newmark said the Marriott hotels pricing “will be very competitive with like hotels in that geographic market” but didn’t have specifics.

Still, he added, “I really think we’re going to be offering so much more. The owners are taking really great pains in looking at details, adding value amenities.”

The hotels will share a fitness center and a casual-dining restaurant, which will likely have a sports theme. The restaurant’s bar will face a pool shared by the two hotels. Each hotel will have either a Starbucks or Seattle’s Best Coffee.

Newmark said the complex hopes to sell attraction tickets too, and it will provide Disney theme-park shuttle service.

The TownePlace Suites will have full kitchens and dining areas, so people staying for a few days won’t have to eat out every night.

The new competition worries nearby hoteliers such as Wade Michael, general manager of the Quality Suites Royale Parc Suites on U.S. Highway 192.

With hotel growth expected to start outpacing demand in Metro Orlando, “certainly we’re concerned that the area will become saturated with supply, and it won’t be a healthy environment for us or the new products,” Michael said. “We have to kind of wait and see how we would combat it.”

Disney is selling land for the project to developers. The first phase is by JL Properties Inc. of Alaska, which bought about 10 acres last year from Disney subsidiary Flamingo Crossings LLC.

The hotels could be competition for Disney’s budget accommodations. However, those hotels are closer to the theme parks and have unique features. At Disney’s All-Star Sports Resort, for example, exterior décor includes three-story footballs, helmets and surfboards. A Goofy fountain squirts water at the pool, and the hotel has nighttime Disney movie screenings.

“It’s a very strategic move on their part to make it good enough, but not as good as or superior to what Disney has to offer,” Smith said.