The slogan for the City of Winter Haven in Polk County could easily be “water, water everywhere.” Known as Central Florida’s inland coast, Winter Haven’s fabled Chain of Lakes – a series of 16 lakes connected by navigable canals – is just a portion of the 50 lakes within or bordering the city limits. Thanks to all that water, you don’t have to go far to see sailboats, pontoon boats, and paddleboards. Water even defined the theme park and sport that first brought Hollywood to Central Florida. Today, the thriving city offers everything a family vacation could want, from a theme park for the kids to a vibrant downtown for the adults and a healthy portion of Americana for everyone. 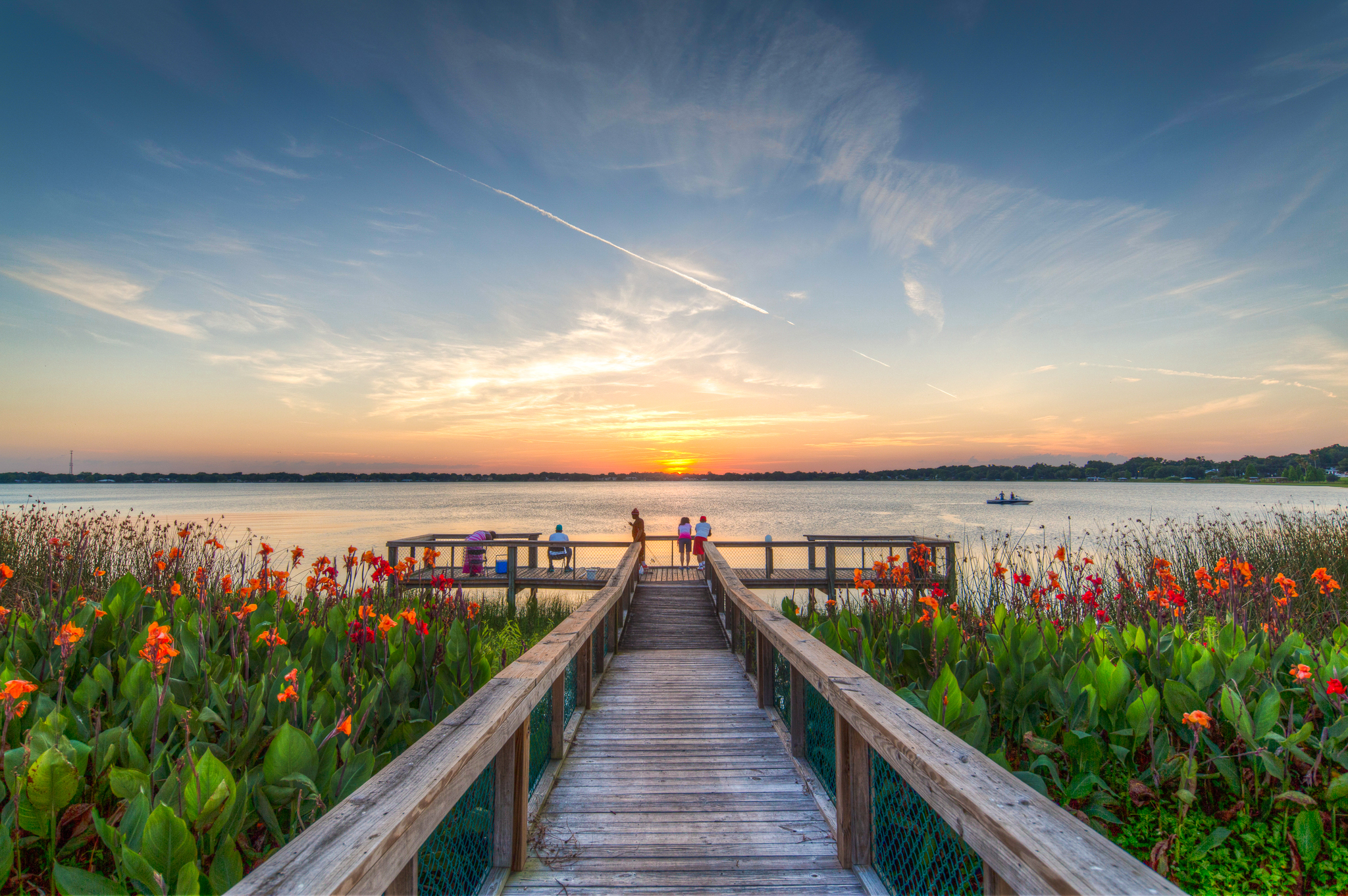 It may have opened in 1936 as a botanical garden, but Cypress Gardens rose to worldwide fame thanks to Lake Eloise. Legend has it that soldiers stationed nearby came there clamoring for a water ski show. Not wanting to disappoint them, owner Dick Pope’s own children and friends performed. Little did they realize that the show would develop into a mainstay of the theme park – and put both Florida and water skiing on the world entertainment map.

Pope, a master showman, seized on the opportunity. Soon, Winter Haven was known as the “water sports center of the United States,” thanks to newsreels and photo shoots. On the water, the shows grew to include human pyramids, clowns, titanic ski jumps, and skiers flying into the air thanks to paragliders. The spectacle soon caught the eye of Hollywood, captured in the hit 1953 Esther Williams ode to the sport, “Easy to Love,” featuring many Cypress Gardens stunts and performers. As the years passed, television often used the gardens as their backdrop, and world-famous celebrities took to the water during the massive water ski show spectacles.

As the sport grew, so did the legend of Cypress Gardens which, in turn, drew more elite athletes as well as state, national, and world championships events. Records were broken on Polk County waters thanks to the steady stream of ambitious skiers drawn to the sport’s biggest stage. Willa McGuire Cook co-created the swivel ski and rocketed to fame as the prima ballerina of the sport. Cypress Gardens skiers continued to set world records and world firsts in multiple disciplines, including the first three-, four- and five-tier human pyramids. Hundreds of firsts and records were documented.

Today, Cypress Gardens and the water ski shows are part of the LEGOLAND Florida Resort, a 150-acre interactive theme park with more than 50 rides, shows, attractions, restaurants, and shops. The largest LEGOLAND park in the world, highlights include The LEGO Movie World, featuring a flight aboard Emmet’s Triple Decker Couch on the Masters of Flight ride or the frenzied world of Unikitty’s Disco Drop; the LEGOLAND Florida Water Park, designed to mix kids two favorite things – LEGOs and water – into an unforgettable experience of slides, tubes, and splash pads; and the Pirate Island Hotel, an on-site accommodation that invites brick fans to vacation like a pirate. 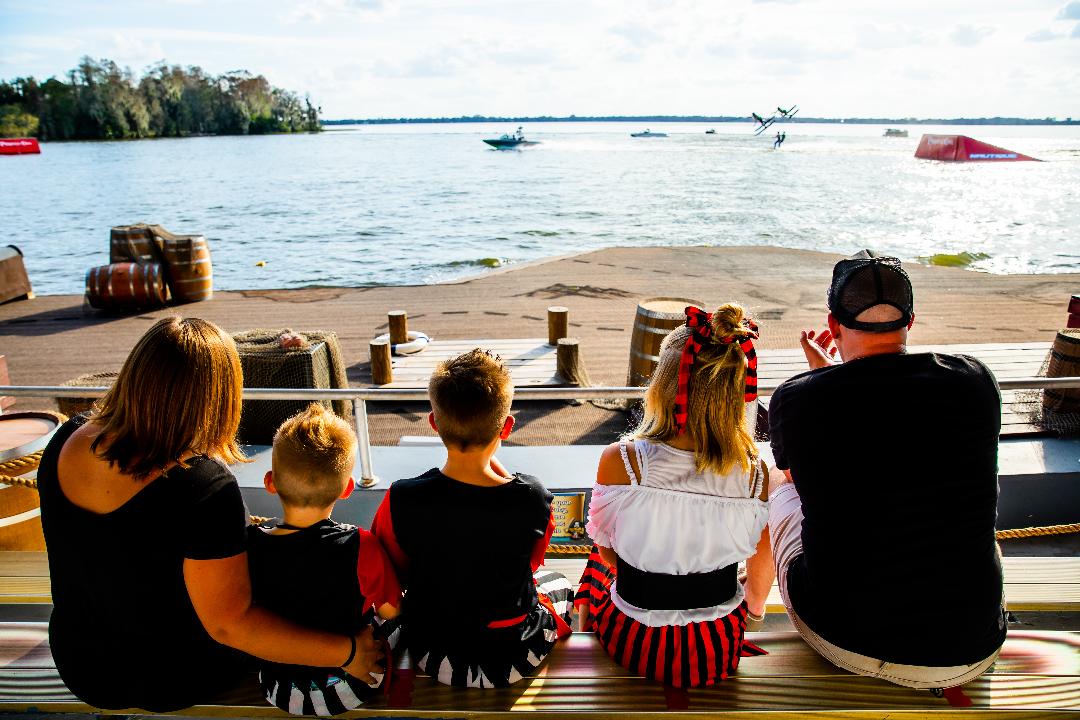 Water skiing isn’t just a thing of the past in Winter Haven. The Cypress Gardens Water Ski Team, a mix of the sport’s past, present, and future, performs monthly on the third Saturday on Lake Silver, just steps from the heart of downtown. And with the sport’s 100th anniversary coming up in 2022, the best water skiers in the world will be bringing their talents to the hallowed waters surrounding Winter Haven for various competitions and celebrations. And while the Centennial Celebration on Lake Silver on July 3 will be spectacular, the International Waterski and Wakeboard Federation World Water Ski Show Tournament in October is a can’t miss event for the sport. Featuring teams comprised of the best aquatic athletes the world over, Team USA will be defending its title.

If you’d rather get out on the water yourself, you can explore the many lakes that makeup what locals just call “the Chain” on a Living Water Boat Cruises. One of the best ways to see the natural flora and fauna that call these waters home, Living Water offers 10 different types of boat tours including a Sunset Cruise, a Day Tour with Lunch, or a 2 Hour Tour. Of course, the best part of these cruises is the insight of the captains, many of whom have spent their lives on these waters. Since the tours depart from various locations in Winter Haven, it is best to book ahead.

Winter Haven may be known as the Chain of Lakes City, but that doesn’t mean all the action is on the water. In fact, the city is just as well known for its roots in the American sport of baseball. Since the 1920s, baseball teams from the cold North have traveled to the area for Spring Training. Since then, numerous teams – from the New York Giants to the Boston Red Sox and Cleveland Indians – have started their year in Winter Haven. Today, those same fields are used by some of the best baseball players in the nation during the RussMatt College Baseball Invitational, the largest collegiate event of its kind in the country. 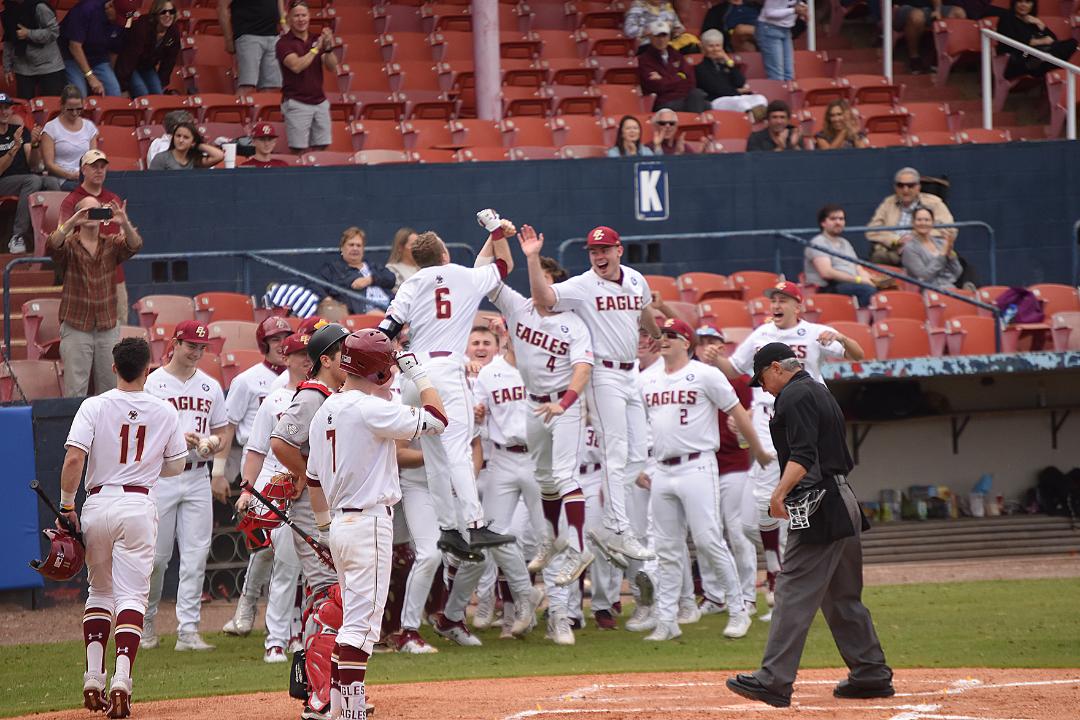 And for nearly all that time, Andy’s Drive-In has been a serving visitors. From the straight-from-the-50s neon sign out front to the high-backed booths inside, you might think you are on the set of “American Graffiti” or “Happy Days.” And you aren’t far off – Andy’s has been a Winter Haven favorite for nearly 70s years. For a trip back to the days before calories were king, this is the place. Crinkle-cut fries and onion rings, burgers, and hot dogs are all on the menu, as are old-time American standards such as liver and onions and open-faced turkey sandwiches.

But make sure you leave room for dessert. Ice cream – scooped, not soft serve – is the treat here. To really kick up the nostalgia, for a bit extra you can turn that chocolate shake into a malted. The menu is so diverse, even the pickiest eaters will find something.
Andy’s Igloo, connected to the main building, is a walk-up window to America’s culinary past. Here you can order your food to-go and do what the locals do – drive to one of Winter Haven’s numerous lakes for a waterside picnic. Andy’s is located at 703 3rd St. SW in Winter Haven. 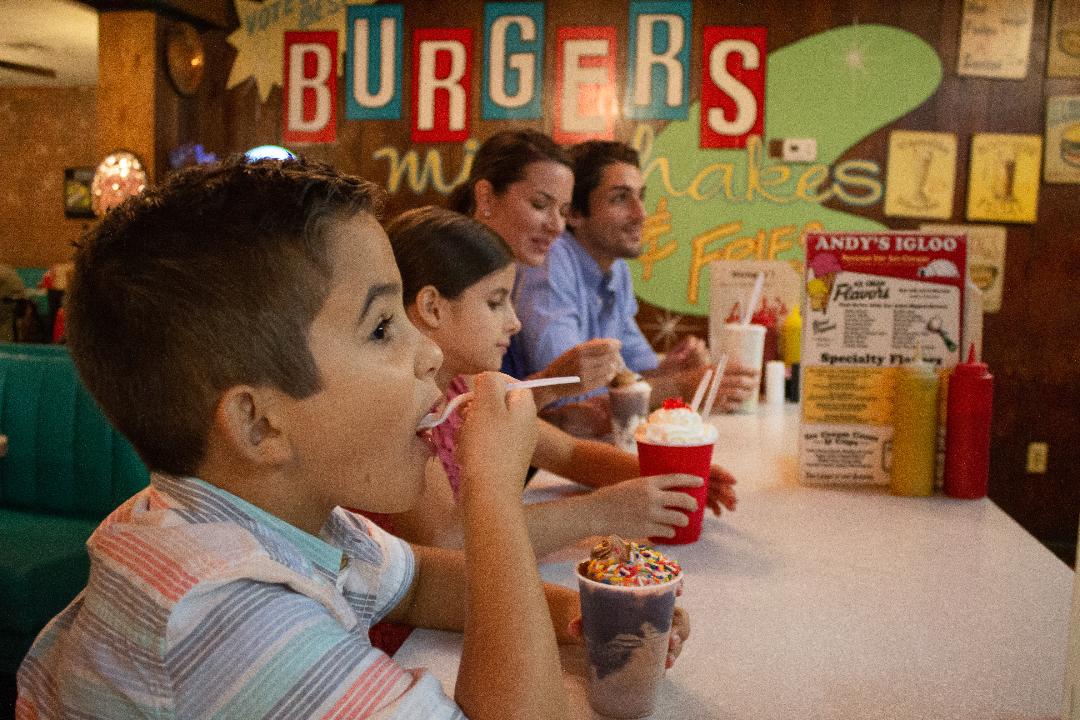 Still, if you are surrounded by water, why not take in a sunset while dining at Harborside, a restaurant so close to the water you can park your boat. The menu is packed with favorites, from grouper to catfish, lobster tail to ribs, as well as pasta dishes, and an extensive kids menu. Thanks to ample outside dining options, there is no reason why you can’t enjoy a peaceful meal while looking out over the Chain for a signature Florida sunset.

After a cruise or a day at the park, downtown Winter Haven beckons. If you feel like an adult beverage, stop by the children and dog-friendly Grove Roots Brewing Co., one of the best breweries in Central Florida. While the kids choose from a variety of sodas, juices, and sparkling waters, the adults can pick from various citrus-inspired ales, witbiers, and stouts. Food trucks are often parked nearby, giving everyone a variety of foods to nosh on, and the establishment offers a wide variety of yard games and board games.

From water activities to baseball, Americana to waterfront dining, Winter Haven is just one example of why Polk County is known as Florida’s Sweetest Spot – and still holds the title of Water Ski Capital of the World. For more ideas of things to do and places to go while enjoying the best of the Sunshine State, visit www.visitcentralflorida.org.