Orlando Attractions Update – Guests at SeaWorld’s theme park in Orlando, Florida, will no longer be allowed to participate in dolphin feeding. 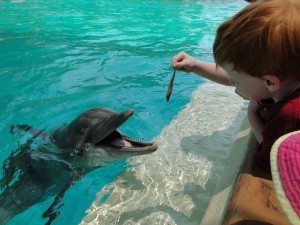 Visitors in the Dolphin Cove area this week were still able to touch and pet any dolphins that approached them, but the park was no longer selling $7 trays of fish to entice the aquatic mammals.

Starting next month, guests will be able to buy 10-minute packages – starting at $15 a person – that include touching the dolphins and having photos taken with them under a trainer’s supervision.

A SeaWorld spokeswoman stated that the new program is similar to popular ones in SeaWorld’s San Diego and San Antonio parks.