Mention Winter the Dolphin and a lot of visitors know exactly who you’re talking about – namely the most famous resident at Clearwater Marine Aquarium. Their marine life rescue center is home to Winter, star of the popular Dolphin Tale movies, filmed on location in Clearwater. Not a lot of folks however are as familiar with the full extent of the ongoing work of rescue, rehabilitation and release that Clearwater Marine Aquarium is involved with. 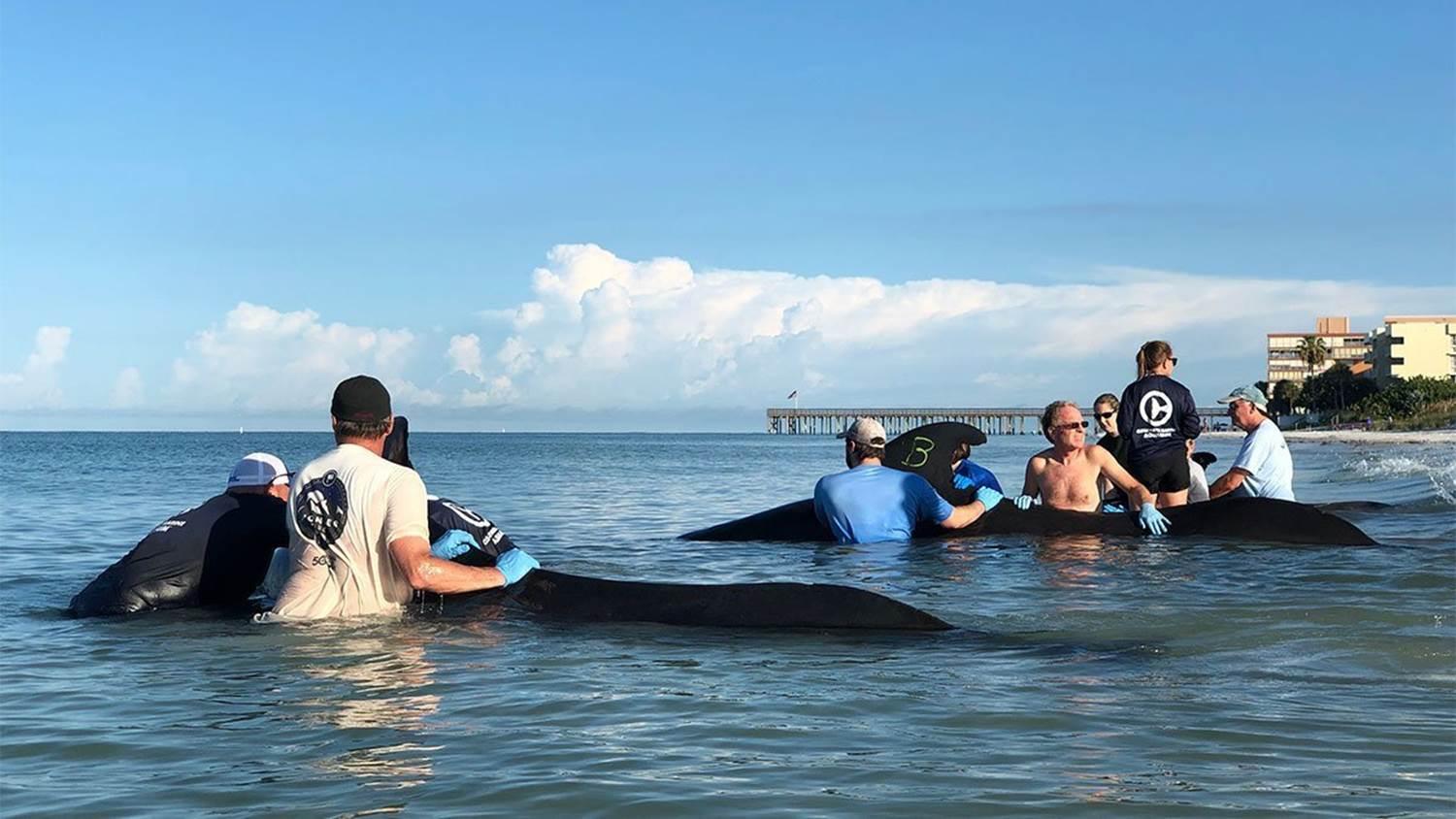 Last month five pilot whales stranded in the shallow water off Redington Beach, on the Gulf Coast of Florida. Clearwater Marine Aquarium’s Rescue Team responded along with wildlife agencies and local authorities, including the National Oceanic and Atmospheric Administration, Florida Fish and Wildlife Conservation Commission, Pinellas County Sheriff’s Office and other partner organizations. After careful assessment from veterinarians and marine biologists on the scene, it was determined that three of the pilot whales were healthy enough to be released back into the Gulf of Mexico. The other two pilot whales required more attention and were taken to Clearwater Marine Aquarium’s new rehabilitation facility located in Tarpon Springs. (The rehab facility is not open to the public.) 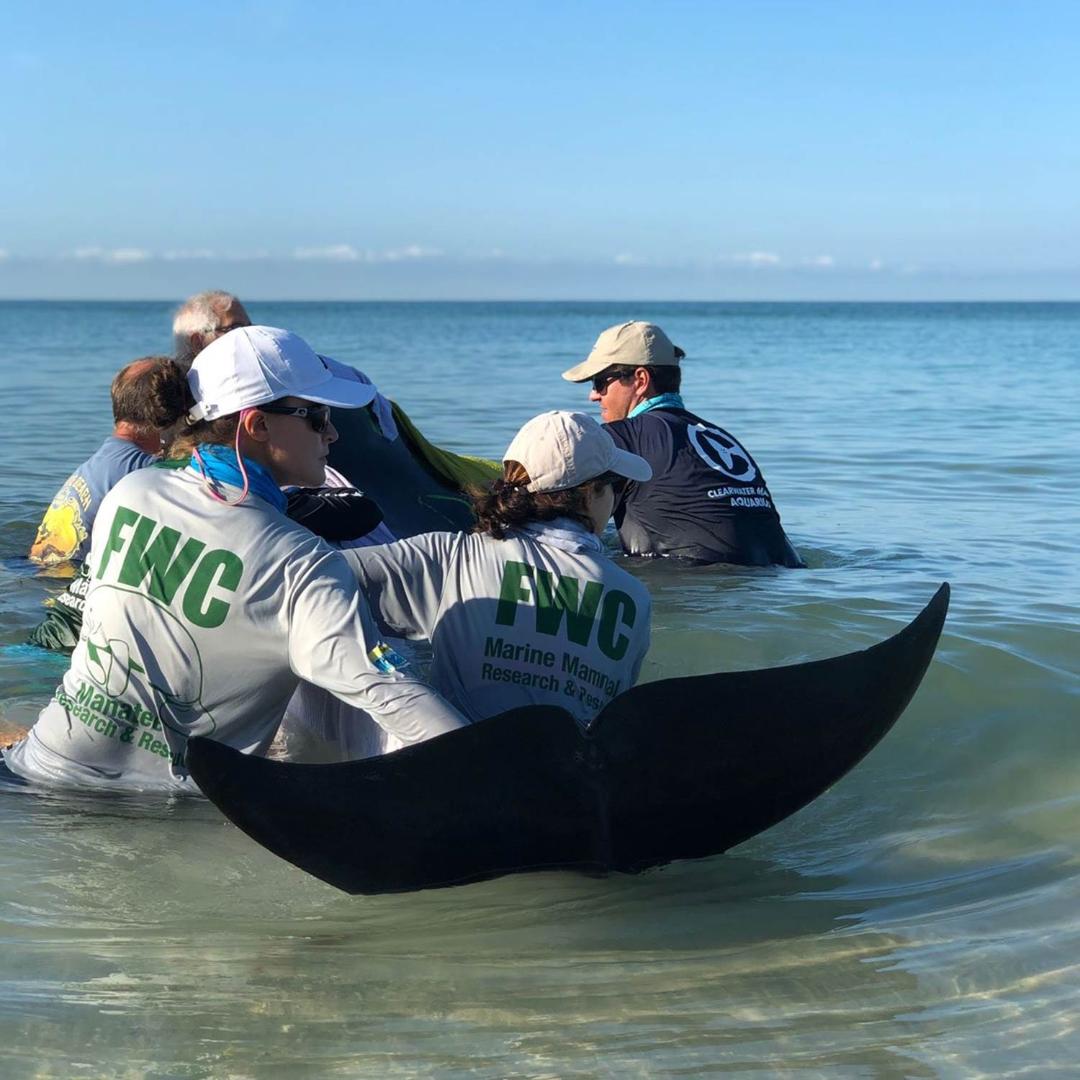 “Our goal is to get them offshore as soon as we can,” Yates said.

These short-finned pilot whales are deep-water marine animals, who mostly feed on squid at depths of 1,000 feet or more, and are not commonly found close to shore. It was not immediately clear what caused the small group of pilot whales to beach themselves, but due to their social nature, it is possible that if even one animal is ill, the other companions may follow it to shore. Pilot whales are a species of cetaceans related to dolphins, which live in stable groups of 15 to 30 animals but can gather in social groups of hundreds. They may be dispersed over an area a half-mile wide while swimming together in the search for food.

Laura Engleby of NOAA said when offshore species like pilot whales get into shallow water, they tend to get disoriented.
“It’s hard for them to find their way out,” Engleby said of the distressed whales.

The rescue was a strong display of team effort from multiple agencies with support from the local community, volunteers, and beachgoers who were nearby and willing to help provide supplies and assistance when needed. Beach tents and cold towels were offered and utilized to help shelter the marine animals, and rescuers, from the rising summer sun. Cetaceans have extremely sensitive skin and would be otherwise vulnerable to severe sunburn while stranded in the shallow water.

“This amazing community has been coming together bringing towels and water and food and being so supportive of everyone here,” said Engleby. After several hours stabilizing the distressed animals, and a thorough assessment from veterinarians, NOAA determined that two of the pilot whales would require more care and would be transported by land to Clearwater Marine Aquarium’s newly completed rehab facility at Fred Howard Park in Tarpon Springs, Florida. 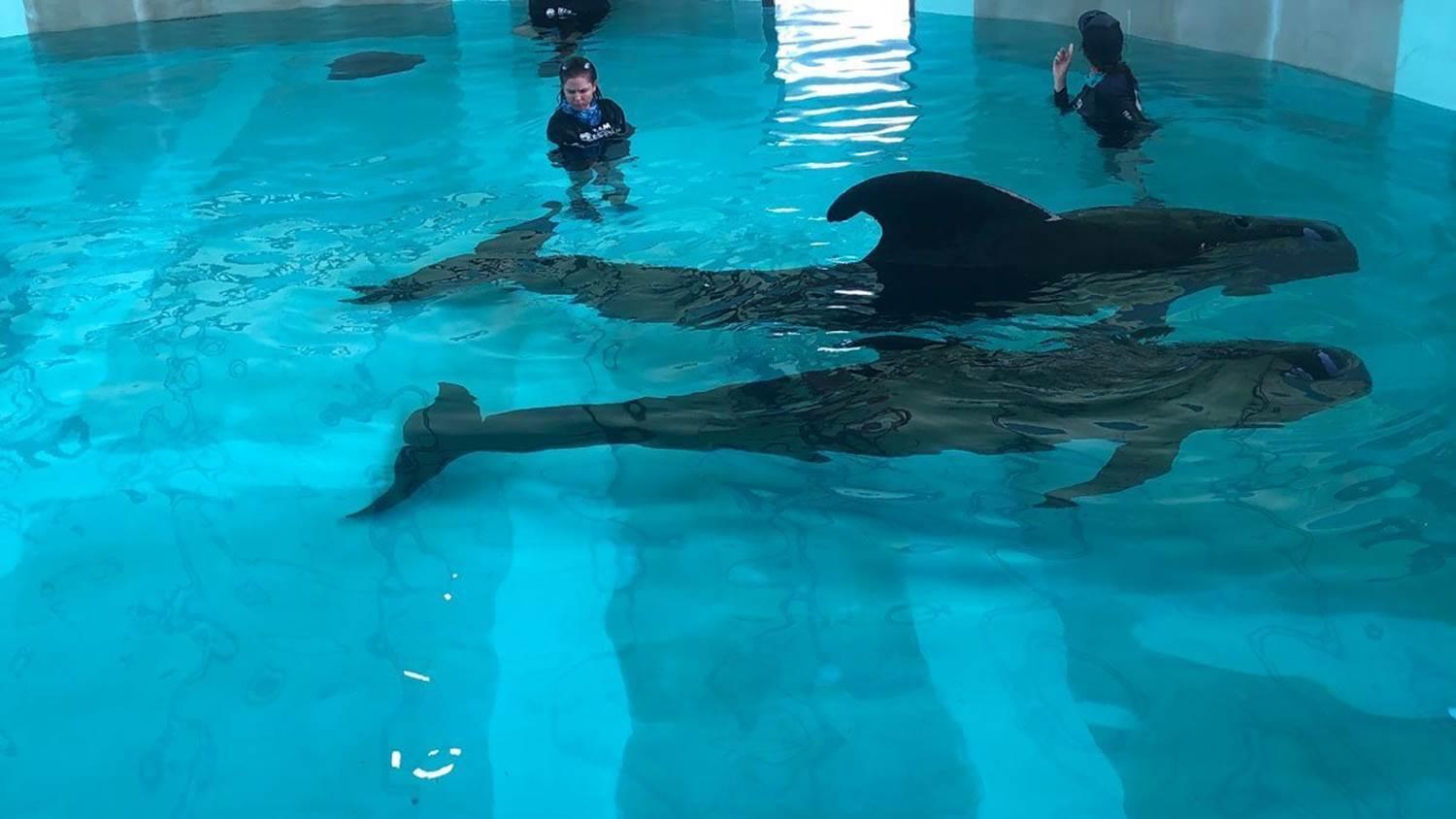 Two pilot whales recovering at CMA’s rehab facility in Tarpon Springs. The other three pilot whales were deemed healthy enough to be immediately returned to deeper water in the Gulf of Mexico. They were transferred to three vessels in the water and transported miles offshore where they would be at least 30 to 40 feet deep and able to safely swim away. They were tagged with satellite transmitters to track their progress and ensure they do not attempt to stand near shore again. It is hoped that if the two rehabilitating pilot whales make a quick recovery, they will be able to be released in an area where they can be reunited with the others. The latest tracking data showed the three pilot whales heading southwest away from the coast. 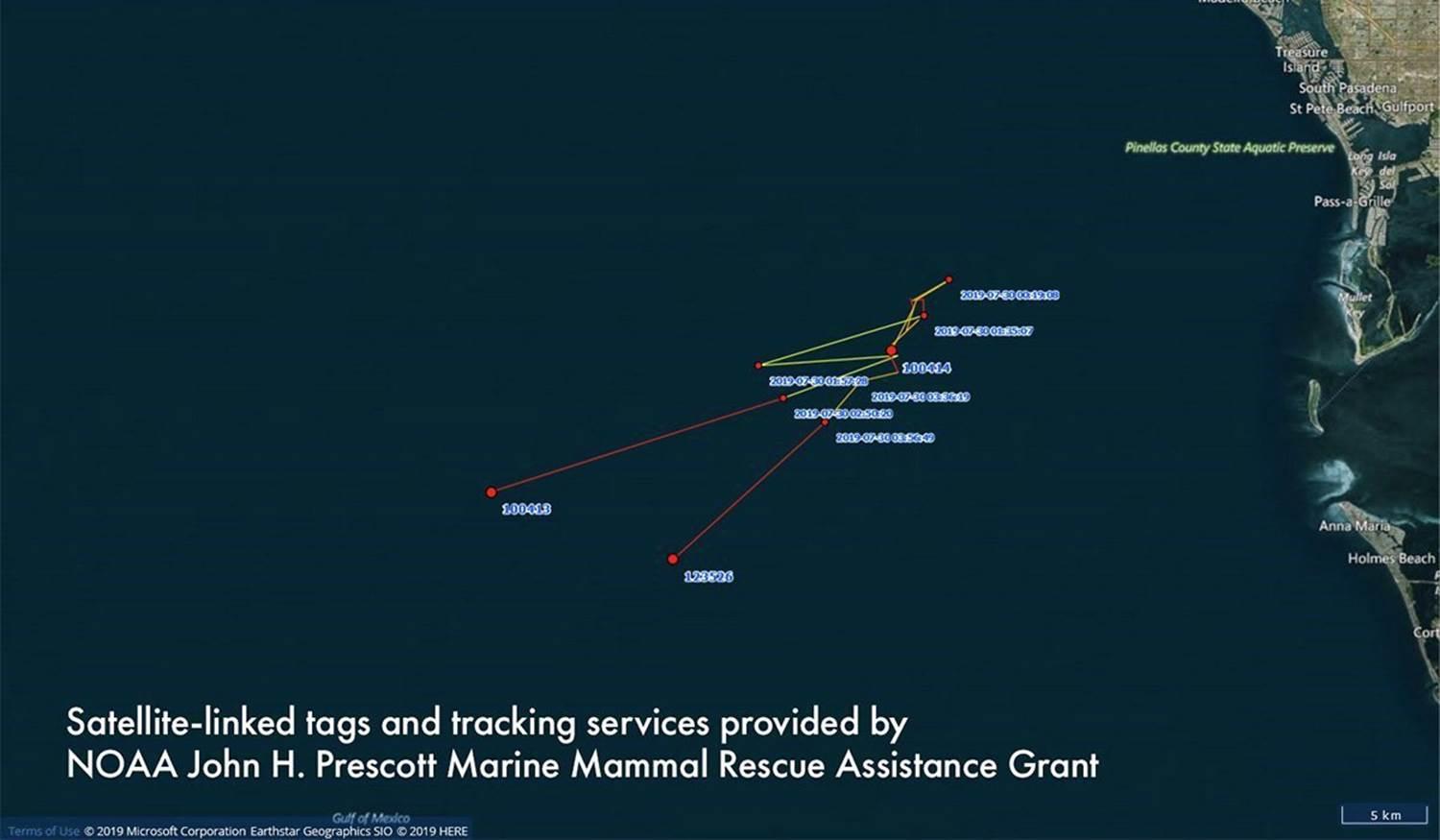 Pilot whale tracking position on July 30, 2019. Tracking data provided by the Chicago Zoological Society’s Sarasota Dolphin Research Program.
Jessica Powell, a marine mammal biologist with NOAA, said that it’s hard to pinpoint what may have caused the five pilot whales to come to shore. “The other two whales have been transported to Clearwater Marine Aquarium rehab facility for a few days, where they will receive additional medical treatment,” Powell said. “Hopefully, this will just be a few days of holding for them and they can be transported back out like the previous three.”

The two remaining pilot whales will be temporarily held and continue to receive care at CMA’s private rehab facility in Tarpon Springs until they can be released. For more information follow the latest updates at https://www.seewinter.com/five-pilot-whales-rescued-gulf-coast/ 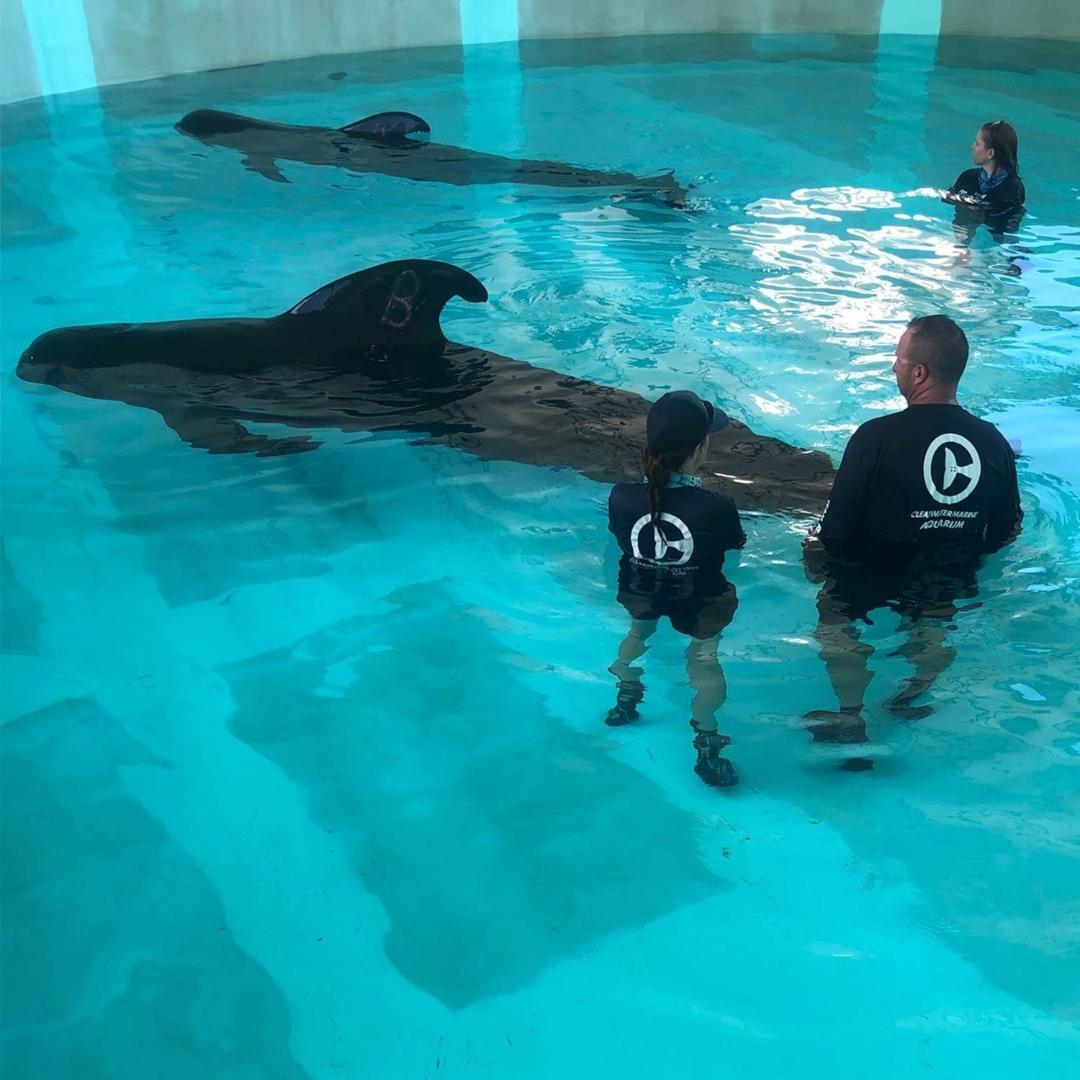 All photos featured taken acknowledging the following – stranding response conducted under stranding agreement between NMFS and CMA under the authority of the Marine Mammal Protection Act (MMPA).